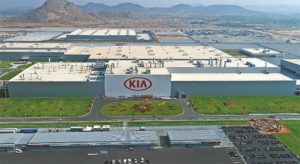 The greenfield car manufacturing project, to be build on a 600-acre area located at Penukonda, about 75 km from Anantapuramu, will be the South Korean company’s first unit in India. Factoring in investments by associates and vendors, the Kia project is likely to see overall investment of around $2 billion.

The construction of the new manufacturing plant, with a production capacity of 3 lakh units a year and production is likely to begin in the second half of 2019. The project is likely to create permanent and temporary jobs for about 11,000 people.

Kia motors main goal is to start selling cars produced at the new plant by the end of 2019.

Naidu, assuring all support to Kia, said: “I am happy Kia Motors has finalised its investment plans for India and has selected Andhra Pradesh. Automobile and auto components are vital thrust areas for the growth of the State.”

Han-Woo Park said, “The plant will enable us to sell cars in the world’s fifth-largest market, while providing greater flexibility for our global business. Worldwide demand for Kia cars is growing, and this is our latest step towards becoming a leading global car manufacturer.”

As per the recent data it is forecaster that it will become the third-largest car market by the end of 2020.

Kia plans to produce a compact sedan and compact SUV at the Andhra Pradesh facility. The plant will occupy around 23 million sq ft and have facilities for stamping, welding, painting and assembly.

Founded in 1944, Kia Motors Corporation is Korea’s oldest manufacturer of motor vehicles. Kia rolls out over three million vehicles every year from it 14 manufacturing and assembly operations in five countries; the vehicles are sold in 180 countries. Kia has over 51,000 employees and annual revenues of over $45 billion.

For Naidu, this project is a big win as he has managed to overtake Tamil Nadu and Maharashtra, two of the biggest automotive hubs in the country to the number one position.

Not only does Naidu plan to monitor the Kia plant’s progress personally, he has also appointed the District Collector as the nodal officer for the greenfield automobile project.