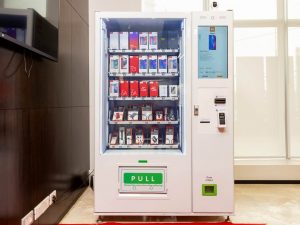 Chinese Technology giant Xiaomi recently made an announcement to introduce the Mi Express Kiosks across the country. The new Mi Express Kiosks are basically vending machines that wil help Indian consumers and Mi Fans to buy Xiaomi smartphones and mobile accessories directly from the kiosk.

The kiosks are built, designed and enabled to accept all forms of payments across credit cards, debit cards, cash and UPI. A touch screen lets buyers communicate with the vending machine and select the device of their liking.

Xiaomi with the launch of these vending machine-style kiosks, the Smart phone giant has once again taken lead and developed a unique retail strategy in reaching out to its consumers directly, eliminating operational and cost inefficiencies for the consumers and will build significant brand image. According to Xiaomi, Mi Express Kiosks serve as a highly effective initiative for consumers to easily access and buy Xiaomi products instantly in offline markets.

According to the leading Chinese smartphone manufacturer, all technologies and infrastructure which was utilized in building Mi Express Kiosks were researched and developed in India, although the similar business model has been already present and launched in China in 2018. The vending machines would be available between 10 am to 8 pm in India, with promoter staff available to help and guide the consumers during those hours.

The company aims to set up around 50 kiosks in the coming months, and gradually expand the retail plan across more Indian cities.

Xiaomi plans to install the kiosks across metro cities in public areas with greater footfall such as tech parks, metro stations, airports, and shopping malls.

From last one year Xiaomi has been betting big on India and making all efforts towards making India it’s the second biggest market after China. The company has already introduced options such as Mi Credit and has been backing all the Indian government initiative such as Digital India, Make in India, Startup India and data localisation.

According to leading research firm IDC, Xiaomi was dominating the shipment tally with 30.6 per cent share in the March 2019 quarter, followed by Samsung (22.3 per cent), Vivo (13 per cent), Oppo (7.6 per cent) and Realme (6 per cent). Total smartphone shipment in the country grew 7.1 per cent to 32.1 million units in the said quarter.