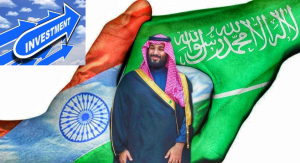 Saudi Arabia, the world’s biggest oil exporter, is looking at investing USD 100 billion in India in areas of petrochemicals, infrastructure and mining among others, considering the country’s growth potential. Saudi Ambassador Dr Saud bin Mohammed Al Sati has said India is an an attractive investment destination for Saudi Arabia and it is eyeing long-term partnerships with New Delhi in key sectors such as oil, gas and mining industry.

The mega deal in which Saudi Aramco is buying 70 percent in Saudi chemicals giant Sabic cleared another hurdle on Friday after India’s competition authority approved the transaction that needs clearance in India because both Saudi companies are operating in the country.

The Competition Commission of India (CCI) said on Friday that it approves the acquisition of 70 percent in Sabic by Saudi Aramco from the Public Investment Fund (PIF) of Saudi Arabia.In India, Saudi Aramco is mainly active in the supply of crude oil, liquefied petroleum gas (LPG), base oil, and petrochemical products, while SABIC is mainly active in the supply of agri-nutrient and petrochemical products.The acquisition of a majority stake in Sabic was one of the officially stated reasons from Saudi Arabia to put on hold the listing plans for Aramco, as the Saudi oil giant focused on acquiring the 70-percent stake in Sabic.

The total investment by NRIs in Indian real estate is projected to reach anywhere near the range of $13.5 billion by the end of the next financial year. Nearly half of the investments in real estate are being made by NRIs settled in the Gulf countries, including Saudi Arabia, UAE, Oman, Kuwait, Qatar, and Bahrain. Investments have also been coming from North America, including Canada, as well as from certain European countries and the East Asian nations of Singapore, Malaysia, Japan, and Korea. NRIs favourite investment cities in India are Mumbai and Bengaluru.

Indian economy will have to face the heat of Crude Oil flames of Saudi Arabia by putting pressure on the ever lowest -GDP growth rate . India imports 82% Crude Oil of its requirements where Saudi Arabia is the second largest supplier of crude oil to lndia which contributes 18% out of lndia’s total crude oil imports . Its impact on lndian economy will be with increased Capital Account Deficits , Fiscal Deficits and Current Account Deficits . And it finally means weaker Rupee , higher import expenditures so unfavorable balance of payments , higher revenue expenditures , curtailment in capital expenditures , inflation , lower demand consumption , depressed supplies , lower investment with lower employment and so lower purchasing power . Government of India’s revenue will be in pressure so public expenditures will be lower , economic activities will be lower and finally -GDP growth rate will be lower.

Under vision 2030, Saudi Arabia plans to diversify its economy while reducing its economic dependence on petroleum products. Makes sense for a cash rich low growth economy to invest in a capital starved, high growth economy. With the recent ‘coming of age’ Indo-Saudi Energy-Deal; the Saudi Aramco gets access to a large and growing market for its crude oil, while India gets an investor with surplus capital to invest in its energy sector.